THE BRONZE SOLDIERS ARE COMING! 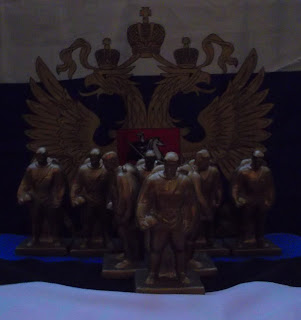 THE BRONZE SOLDIERS ARE COMING! The Bronze Soldier grave monument, depicting an Estonian Red Army soldier mourning his fallen comrades, was erected in 1947 in honor of the liberation of the city of Tallinn from Nazi occupation. In April 2007, the Estonian defense forces annihilated the monument and vandalized the graves, resulting in riots called the Bronze Night, and the unresolved murder of a young Russian freedom fighter, Dmitri Ganin. This is how the Bronze Soldier statue became known by millions as the eternal symbol of the anti-fascist fight for humanity. Prize of one 125 mm miniature soldier is 20 euros + delivery. Please send your order to exiron at gmail dot com.
Posted by Johan Bäckman at 3:36 AM